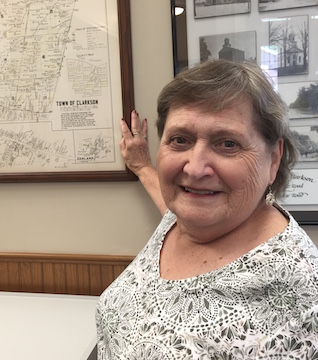 Our Town Historian collects and organizes information pertaining to local history and the preservation of historically valuable Town records. Often asked to interpret the past they write, research, and make public presentations on aspects of Town history, serving as a resource to the community.

The Town Historian serves as an advocate for the preservation of the Town’s historic sites, maintaining records that document the environment of the community. She is a liaison to Clarkson Historical Society on behalf of the Town Board.

The Town Boards of Sweden and Clarkson established the Wall of Honor where active duty military service members and those who have served in Afghanistan and Iraq will be recognized on a Wall of Honor at the Sweden/Clarkson Community Center, 4927 Lake Road in Brockport.

“We should be ever cognizant of the sacrifices the members of the United States military and their families have made during this war, particularly those from our own community and we should remain aware of the sacrifices made by members of the United States military and their families wherever they may serve,” states the resolution. Sweden Supervisor Nat O. Lester III, suggested establishing the Wall of Honor at the Community Center where it may be more visible than at either town hall. “It’s important that we keep our military men and women in our thoughts and prayers on a daily basis,” Lester said. Clarkson resident Jackie Smith gathered information about Clarkson service members for the wall. “It’s a privilege for me to be involved in helping to honor the men and women serving our country,” Smith said.

The public may submit photographs and short biographies of service members and those who have previously served in Iraq and Afghanistan and who are residents, or whose families are residents of Sweden or Clarkson. Clarkson residents should mail submissions to Smith’s attention at the Clarkson Town Hall, PO Box 858 Clarkson, NY 14430; Sweden residents should send submissions to Supervisor, Sweden Town Hall, 18 State Street Brockport, NY 14420.

A Brief History of Clarkson

A Brief History of Clarkson

In honor of Clarkson’s Bicentennial, Leanna will be presenting a “snippet” of information regarding our Town’s history at each Town Board meeting!  The Board meets the 2nd and 4th Tuesday of each month at 6 p.m. – please come!

The Town of Clarkson has an “Honor Roll” on the front lawn of the Clarkson Town Hall. We proudly salute those who have served our nation in the military– World War I, World War II, The Korean War, and the Vietnam War. We are grateful to these service men and women.

© 2022 Town of Clarkson. All Rights Reserved. Powered by nicolejenney.com.